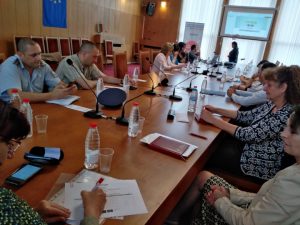 Lawyer Dilyana Giteva, national coordinator of the JUSTROM program, presented the program, which is a joint initiative of the Council of Europe and the European Commission. For the three years it has been operating in Bulgaria, the program has helped dozens of Roma women, women from various minority groups and anyone who is in a vulnerable position, needs help or has rights violated. The following discussion focused on two main issues: domestic violence, which has become more frequent during the pandemic months, according to experts, and hate crimes, which often remain invisible, but their proper identification as such sends a very clear message – not just to perpetrators, but also to the whole society. Teodora Krumova from the team of the JUSTROM Program in Veliko Tarnovo stressed that in order to address the problem of domestic violence in the Roma community, teamwork is needed: on the one hand to change attitudes and sensitivity to violence within the community, on the other – to overcome stereotypes that exist among the institutions themselves, and thirdly – mistrust on both sides. Good practices for joint actions in cases of domestic violence among some of the most conservative Roma groups in Veliko Tarnovo were also shared, cases that proved to be significant because they sent an important message: both to the community and to society that such actions are unacceptable and would be sanctioned with the full force of the law. The case in question has led to a sharp reduction in violence and more confidence among victims that there are protection mechanisms and they can use them. Mr. Totko Totev, representative of the District Prosecutor’s Office of Veliko Tarnovo and coordinator for domestic violence, shared the practices in the District Prosecutor’s Office and the targeted action to detect such crimes. He also presented the existence of a register of cases of domestic violence. 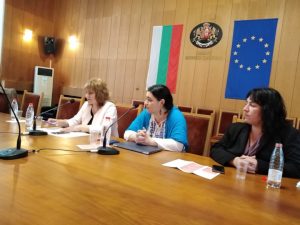 Participants also discussed hate crimes and the importance of reacting quickly to perpetrators. They united around the message “Racism is not fascionable”, shared by the President of the District Court in Veliko Tarnovo Mladen Dimitrov

Lyubov Stoycheva, a lawyer in the Department for the Enforcement of Judgments of the European Court of Human Rights, also joined the meeting distantly via Zoom. She spoke about the problems related to hate crimes and domestic violence in vulnerable communities, sharing international practices in dealing with such cases . Ms. Stoycheva shared examples of lawsuits filed and won in the ECHR against Bulgaria.