Over 130 students from 106 schools joined a discussion with Education Minister Krassimir Valchev on the future of education, distance learning, segregated schools and how education can change young people and their communities. The discussion was organized online by the Amalipe Center as part of the events on the occasion of the Vasilitsa cultural holiday, marked as the beginning of the new year and day of Roma culture. What did the young people ask and what answers did they receive from the Minister of Education? 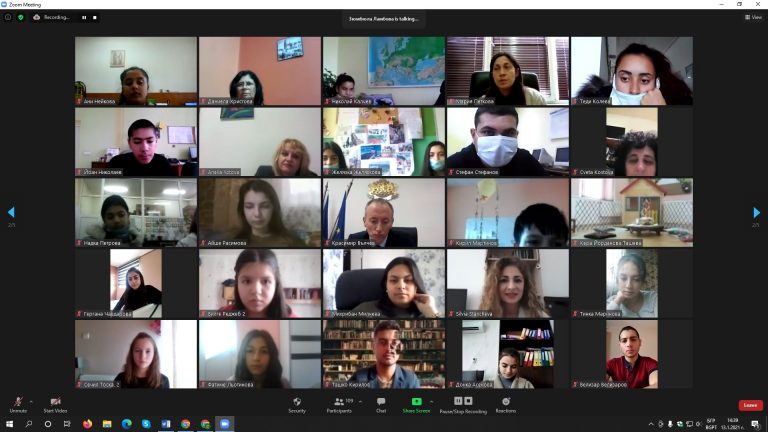 The meeting began with the presentation of part of an interactive lesson with digital content, prepared by the United School “P.R. Slaveykov” – Dzhulyunitsa. The topic of the lesson was “What is Vasilitsa”, and the authors – the school principal Daniela Hristova and tenth grader Yuliana Stefanova. Combining fine arts and animation, they showed how digital lessons can present any learning content in a fascinating way. This lesson is part of the Amalipe Center’s initiative to create intercultural digital lessons involving teachers and students. You can see part of the lesson here. 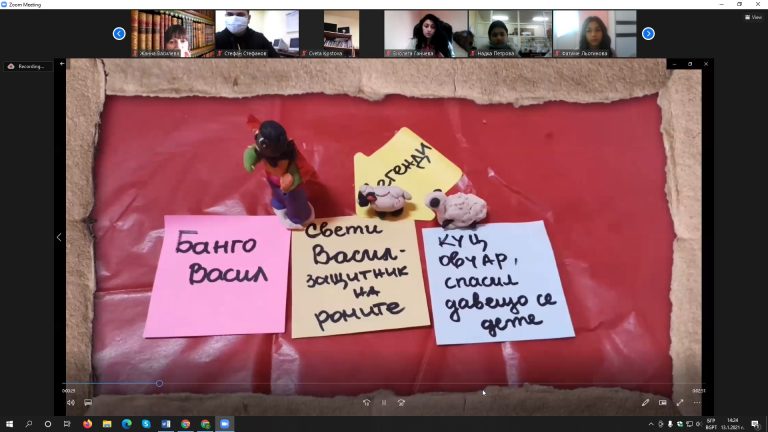 The discussion was attended by young people who are students-mentors in schools of the network Every student will be an Excellent, which unites 297 schools from all over the country. At the beginning of the conversation, they introduced Minister Valchev to their work as mentors who motivate their classmates to actively participate in distance learning. Esil Shukrieva from 11th grade at “Angel Karaliychev” High School – Strazhitsa presented her experience as a volunteer, helping other students to use online platforms and digital resources to be active in distance learning. See the presentation here.

Nelly Nikolova and Denitsa Ivanova from Amalipe Center introduced the participants to the concept of student mentors and the distal training that the organization conducts with them to increase their motivation and capacity. During these trainings, participants not only acquire technical skills, but also have the opportunity to meet guest motivators. These are successful professionals from different ethnic groups, who tell about their way to the university and from there to the professional realization. The presenters invited Minister Valchev to share his personal story and to be a guest motivator at the current meeting.

Hyacinth Lambova, a student at “Hristo Botev” Primary School in the village of Dalgo Pole, caused a storm of online applause with her presentation “How to involve students in activities for the prevention of early marriages?”. This is actually the homework of the Phoenix group of student mentors who participate in the Student Mentor Leadership Program. See the presentation here. See more about Hyacinth and her ambitions in the Maritsa newspaper here.

Although he does not like to talk about himself, Minister Valchev agreed to tell the students about his path and the role of education in it. After graduating from primary education in Galabovo and secondary vocational education in Stara Zagora, he was convinced that there are good teachers in all schools. It is especially important for students to read a variety of literature in a variety of fields, including outside of specific subjects. Krassimir Valchev’s interests changed in different directions during his childhood and adolescence, as it happened with many other children and young people. He was fascinated by the natural sciences, mathematics, then physics, then economics, and so on. His philosophy teacher insisted that students read one book a week, and so they met authors from the humanities. The future minister was especially impressed by the work of Erich Fromm “To have or to be”. The labor market today is so dynamic that students will work in professions that do not currently exist or are not very popular. Probably everyone will have to change different professions. That is why it is important to read a lot and especially for schools and universities to develop learning skills. Today, it is not so important to memorize facts, because we will easily find them on the Internet. It is much more important to learn how to find the facts we need and how to develop lifelong learning skills. For example, the ability to concentrate, to focus on a particular activity is emerging as one of the most important skills for the labor market. Schools and universities must reorient themselves to the formation of skills mentioned by Minister Valchev. 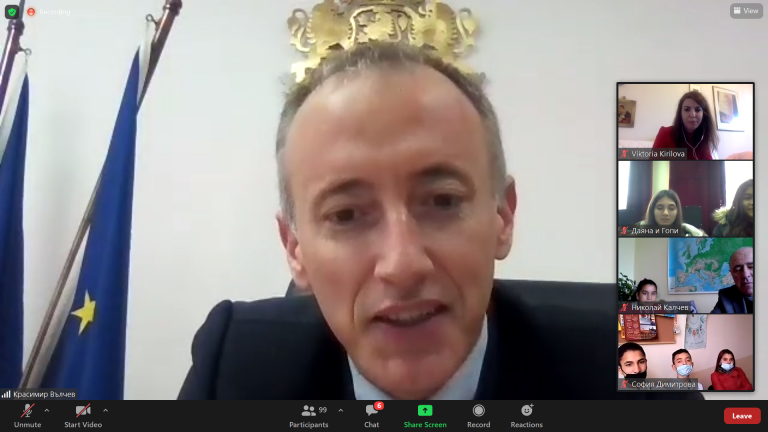 The students asked many questions to the Minister of Education. The most frequently asked question was “When will we return to the classrooms?” There was a general consensus that face-to-face training was most desirable. Minister Valchev replied that he also prefers the largest possible number of students to be in the classrooms for as long as possible. This largely depends on the spread of the pandemic. It is already in the classrooms the initial stage of next week will be able to conduct some practical training of vocational high schools Olympiads and other face-to-face competitions. In case of a continuing decline in the number of infected people, the attendance classes will be gradually restored and for the other classes the priority will be seventh – 12th grade. If there is a third wave of coronavirus, we will look for an option how to keep as many students as possible in school without compromising the health of their parents and teachers.
The students were interested in how they would finish the school year and were assured that it would not be extended more than the already announced additional weeks for project activities. In 320 schools, the additional two weeks will be with classes, as they did not have distance learning in December. In other schools, these weeks will be used for museum visits, field trips, project activities and other activities that will not be mandatory for students. Regarding the next school year, at this time there is no intention to start earlier. 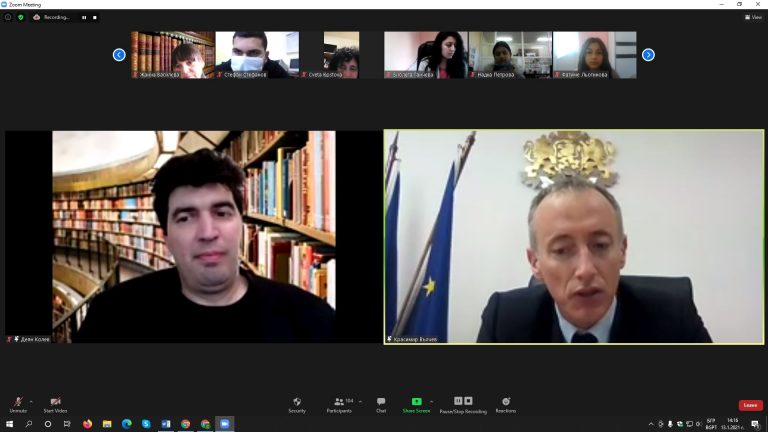 Asking about the external assessment, the students received the answer that at this stage the Ministry of Education and Science already accepts some topics to drop out of the exam options for NEE in 7th grade and Matura in 12. It is still unknown who they are, you will not lose if you study hard, explained Minister Valchev. For now, there will be tests in 4th and 10th grade. You should not worry about them, as they have the character of a simple test, which gives information about the level you have reached, said Valchev.
As expected, some of the questions were related to specific problems faced by Roma students. Why are there schools in which children are only from minorities, asked the Minister of Education the participants in the online meeting. Krassimir Valchev answered them that in some places it is a matter of demography – in neighborhoods and settlements that are entirely with people of Roma and Truska ethnicity. But he added that the fact that secondarily segregated schools in cities have increased in recent years is particularly worrying. These schools were ethnically mixed, but Bulgarian parents withdrew their children from them, led by a misunderstood concern for a higher quality of education. For 2 years now, the Ministry of Education and Science has had a desegregation program, which provides money to municipalities for the transport of children to other schools within the same city. However, the interest is small, so a way will be sought to better promote the opportunity. Valchev assured that the Ministry of Education and Science encourages training in mixed classes.
The ministry strongly supports desegregation efforts. The other difficult topic posed by the students was about labor market prejudices against young people from minorities.
At the end of the discussion, the Minister of Education was invited to present his dream for the school of the future. I imagine it as a desired and positive environment that manages to involve all students, to prepare them for life, said Valchev. With teachers who are happy to be teachers and have a desire to constantly improve and create a tolerant multicultural environment. I imagine that the school is supported by the regional departments of education and other educational structures.
You can see the presentations from the discussions here
In recent years, Vasilitsa (also known in the media as Bango Vasili) has gained popularity as the Roma New Year. In fact, this is St. Basil’s Day, celebrated by the so-called “Old style” (ie the Julian calendar) and only until 3-4 generations ago this was the day on which ethnic Bulgarians and other groups also celebrated the New Year. Currently, Vasilitsa is not celebrated by all Roma in Bulgaria: for some Roma groups it is a major calendar holiday, and others have even lost the memory of it. Why then from the Amalipe Center for another year we organize national celebrations of Vasilitsa within the campaign “Let’s restore the bridges between us”? What do we want to achieve? Look at
https://amalipe.bg/en/why-vasilitsa-and-the-campaign-lets-rebuild-the-bridges-between-us/
And how this day is celebrated and why it is celebrated by the various Roma groups in Bulgaria, you can see on
https://amalipe.bg/en/vasilyovden-the-roma-new-year/
Share
Post tagsKrasimir Valchevmentorsmonstudentsvasilitsa