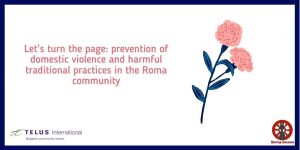 Nature of the project and main activities:

The project is funded by the Public Board of TELUS International Europe in Bulgaria and is aimed at domestic violence against women in vulnerable groups and in some isolated neighborhoods. There will be 6 meetings in different settlements where the Amalipe Center operates, organizing information talks / discussions on “Prevention of Domestic Violence”, or what is domestic violence, what are the rights of victims and who can they turn to in such a case.

Within the project, 6 awareness campaigns will be conducted to increase the sensitivity and public intolerance to the manifestations of domestic violence; information on protection institutions and procedures; services and programs for victims of violence and encouraging attitudes to report cases of domestic violence. We will conduct a population survey on beliefs and attitudes so that the campaigns meet the needs of each target and social group, as well as its specific cultural differences, in addition to explaining the damage caused by the respective act. In addition to the survey, an educational video on domestic violence in the Roma community will be shot at the end of the project. It will come from itself with messages generated and understood by the community. The film will aim to become an educational product that we will promote throughout the educational network of the Amalipe Center and will be a basis for discussions about domestic violence, thus reaching nearly 40,000 students and their families. Representatives of the police and the prosecutor’s office will be included in all meetings and educational discussions, for whom we have also established at this stage that they need some change in the attitudes on the topic. But instead of organizing direct trainings and seminars with them, which do not have a full impact, we will hold meetings in the community and schools. In this way, they will face the problem directly in the countries of their direct work, so that they can “feel” it.

The project implementation period is September 1, 2020 – February 28, 2021. It is financed by the Public Board of TELUS International Europe in Bulgaria.