2014 Award for Outstanding Merit in the Field of Human Rights

The annual awards for outstanding service in the field of human rights and contribution to the promotion of the peaceful existence of societies, religions and cultures, named after the UN High Commissioner for Human Rights, were presented for the eleventh time on 23 October at the Villa Decius in Kraków. 2002 – 2003). There are two categories within which the extremely prestigious annual awards are determined – personality and organization. The international panel of judges examined 39 candidates from around the world this year.

The award in the organization category was given to the Amalipe Center. The organization has received this high international recognition for its work in promoting intercultural dialogue and integration through education, in mobilizing and encouraging the Roma community to continue its education, in supporting the campaign to prevent violence and early marriage, and in contributing to civic identity and tolerance in Bulgarian society. Amalipe Center is the first Roma organization, as well as the first organization from Bulgaria, winner of the award. During her speech for receiving the award, the ceremony of which was held within the international conference “The Power of the Powerless – Revised”, Teodora Krumova stressed:

“Receiving this award is a great honor, not only for us as an organization, but also for our communities. This is their distinction for showing that change is possible. It is also a motivation to move forward, because there are three things that can help the powerless to become strong: solidarity, the vision that a better and more peaceful world exists and the belief that you can be the change that will bring this better and more peaceful world. ”

In the “personality” category, the award was given to Laila Yunus, a human rights activist from Azerbaijan. On April 28 this year, she was arrested 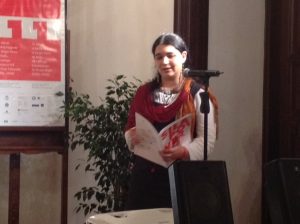 backwards with her husband, Arif Yunus, for her struggle for a democratic society in Azerbaijan. Her arrest was condemned by the US government and international human rights organizations. However, she is still in prison without access to basic medical services and without access to her family.

The Sergio Vieira de Mello Award, UN High Commissioner for Human Rights, was established at the initiative of Villa Decius in 2003. It aims to honor individuals and organizations that make outstanding contributions to the protection of human rights, democracy and tolerance. The award is presented to an individual and a non-governmental organization, which may be from different parts of the world by a board of judges composed of a representative of the President of the Republic of Poland, the UN High Commissioner for Refugees, the Ambassador of the Federative Republic of Brazil to Poland; The Ambassador of the Kingdom of Sweden to Poland, the Ministry of Foreign Affairs of Poland, the Institute of National Remembrance, the Polish Commissioner for Human Rights, embassies and other international organizations in the field of human rights protection.

The winners receive a diploma and a statuette of Sergio Vieira de Mello, created by the famous Polish sculptor Andrzej Renes. The award also has a financial dimension.

The Amalipe Center decided to use the award to support students who fail to meet their tuition fees and at the same time actively work to promote Roma integration, intercultural dialogue and tolerance.

Sergio Vieira de Melo was born in Rio de Janeiro in 1948 and studied philosophy and the humanities at the Pantheon Sorbonne in Paris. While still a student, he began cooperating with the United Nations to become fully involved in the activities of the UN High Commissioner for Refugees in Geneva. He has participated in numerous humanitarian and peacekeeping operations, including in Bangladesh, Sudan, Cyprus, Mozambique and Peru. In 1981,

he became a Senior Political Adviser to the UN Peacekeeping Force in Libya. From 1983-91, he was Chairman of the Office of the Chief Commissioner, Head of the Regional Office for Asia and Oceania, and Head of the International Relations Section. In 1991-96, he served as a special envoy to the UN High Commissioner for Refugees in Cambodia. In 1996 he was nominated Assistant to the UN High Commissioner for Refugees and in 1998 took up his post in New York as Deputy Secretary-General for Humanitarian Affairs. He then served as the UN Special Envoy to Kosovo and from 1999-2002 was UNCTAD’s Chief Representative in East Timor. On September 12, 2002, he was nominated for the post of High Commissioner for Human Rights. In May 2003, serving as a special envoy to the UN Secretary-General, he went on a mission to Iraq. He was killed in a bomb attack at the UN headquarters in Baghdad on August 19, 2003.

The commemoration of the International Day of Humanitarian Affairs was set in 2008 by the UN General Assembly, which chooses the date of August 19 in memory of the twenty-two UN humanitarian workers, including Sergio Vieira de Melo, who died in the bombing at the United Nations Headquarters in Baghdad, Iraq on 19 August 2003.