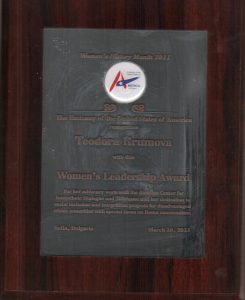 Teodora Krumova is one of the four Bulgarian women awarded by the US Embassy for their achievements in the work.
On Wednesday, March 30, 2011, at a special ceremony held at the American Center at the Sofia Library, Ambassador Warlick presented awards to four Bulgarian women for their achievements in their work for a brighter future for Bulgaria. The four women are Aksinia Gencheva, a convinced defender of the rights of people with different sexual orientations in Bulgaria, Gulten Sabri Mustafa, a librarian at the Ivan Vazov Chitalishte in the village of Vladimirovtsi, Teodora Krumova, program director of the Amalipe Center for Interethnic Dialogue in Veliko Tarnovo and Milena Stoycheva, Executive Director of Junior Achievement – Bulgaria. All of these women work in different areas of public life and with different people, but their work is of great importance to the communities in which they work.

In March 1987, the US Congress declared March a month to commemorate the role and contribution of women and proclaimed it “Women’s Month in History.” This year in early March, the US Embassy invited the public to nominate women who have demonstrated leadership skills in areas related to education, science, human rights, social sphere, art, women’s equality and their contribution to the development of Bulgarian society generally. After reviewing the nominations, a group of four women was selected to be honored.

The reasons for this selection can be seen below:

Aksinia Gencheva – for her work in defending the rights of lesbian, gay, bisexual and transgender people in Bulgaria, for her commitment to their problems and for her persistent and consistent efforts to build and maintain contact with a wide network of NGOs, activists, donors, institutions and citizens in order to support the social integration of people with non-traditional sexual orientation.

Gulten Sabri Mustafa – for her work with children and youth, promoting the education of young people and women in her home village. She herself is an example that she always has time for self-improvement and currently attends courses to improve her skills in librarianship. This award is given to her as an assessment of her contribution to the development of the local community and her role as a mentor to young women in the village of Vladimirovtsi.

Teodora Krumova – for her work on Roma integration in Bulgaria, for her tireless efforts to promote the integration process of Roma, increase their education and support their social inclusion. The award is given in recognition of her active work at the Amalipe Center for Interethnic Dialogue, dedicated to the inclusion of the Roma community.

Milena Stoycheva – for the education and inspiration she gives to thousands of young Bulgarians, for making them believe in themselves and look at themselves as future entrepreneurs, businessmen and leaders in this country.