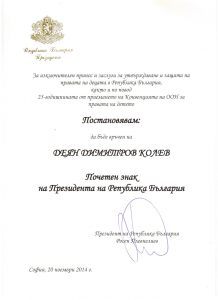 Twenty-five advocates for children’s rights – civil society activists, journalists, teachers, and UNICEF – were honored by President Rosen Plevneliev with the President’s Badge of Honor. This happened at a ceremony held at the Presidency on November 20. The award was presented for outstanding contribution and merits for the promotion and protection of children’s rights in the Republic of Bulgaria, as well as on the occasion of the 25th anniversary of the adoption of the UN Convention on the Rights of the Child. Among the winners was the chairman of the Amalipe Center Deyan Kolev.

“We have come a long way from convincing that every child has their rights, to specific reforms and projects that have been funded by European funds,” said President Plevneliev. Much has been achieved, but much remains to be upgraded and done, we have to implement planned reforms – in youth justice, education, health care, “said Rosen Plevneliev. According to the President, we are no longer talking only about the rights of the individual, but about the economic benefits of creating an environment that guarantees their exercise.” UNICEF research proves that what is invested in early childhood development has its great return. Increasing life expectancy by one year leads to a 4% increase in economic production, and each additional year of schooling – to an increase in potential income by about 10%, “said Rosen Plevneliev.

With an emotional and message-filled speech, the director of the National Network for Children Georgi Bogdanov thanked on behalf of the winners. He noted the much work that is done with the example that when he started working with children in the mid-90s, in the then huge number of homes for retarded children there were about 30,000 children, and today they are only 4,000. At the same time, Mr. Bogdanov does not spare the many remaining challenges: the problem of child poverty in the country is serious, with every second child being poor. Functional illiteracy is extremely frightening for our country, and thousands of children drop out of the education system, and some of them do not even become first graders. There are also huge gaps in juvenile justice – often child victims of violence are interrogated several times, including through cross-examination in the courtroom, which is contrary to any European standards, Bogdanov said. On behalf of the winners, he dedicated the awards to thousands of teachers, doctors, social workers and all those working in the field for the welfare of children.

President Plevneliev concluded the ceremony by saying that the dedicated work and motivation of advocates for children’s rights, such as the honorees, are the best guarantee for the implementation of the Convention and for a better future for children.

“I accept this award as a recognition not only for me and the Amalipe Center, but also for all those who work for the better education of Roma children!”, Said Deyan Kolev upon receiving the Badge of Honor. “Thank you for what you are doing!” Replied President Plevneliev. He wished to visit a school that works with the organization and to see on the spot the effect achieved.