Vasilyovden (Vasilitsa): Vasilyovden or Vasilitsa (sometimes called in the media Bango Vasili ) is celebrated by all Roma groups in Bulgaria. It is widely known as the “Roma New Year”. For the Kaldaras and the miners the holiday is celebrated more modestly, while for the Yerli and especially for the Burgudji and musicians it is a major holiday, comparable only to St. George’s Day.

It is with the Burgujii and Drundars that Vasilitsa is celebrated for three days, and even a slight distinction is made between Vasilyovden and Bango Vasili – on 13.01. and 14.01. is Vasilyovden, and on 15.01.- Bango Vasili (“Kutsia Vasil”). This distinction is not made by Kaldarashi , Rudari as well as other Yerlii (eg. Horahane -roma) in Central Bulgaria who call three days’ Bango Vassili . ” We should also note that the evening of 13.01. against 14.01. very often plays the role of Christmas Eve.

The celebration of Vasilitsa (Vasilyovden) is associated with several Roma legends, which can be divided into two types. In the first type Bango Vasil is Saint Vasil – advocate and protector of the Roma. He rebuilt the bridge over which the Roma crossed after this bridge had been destroyed by the Devil or God and saved the drowning Roma. In the second type of legend, Bango Vasil is a “historical” person, a lame shepherd who saves a drowning Roma child or shelters a Roma fleeing from his enemies. The legend of the flock of geese, which saved the Roma from the Egyptian army by transporting them across the Red Sea, has an indirect connection with the celebration of St. Basil’s Day (Nunev 2000: 107)

In the celebration of Vasilyovden Day (for convenience we will use Vasilyovden and Bango Vasili as synonyms, as they are in the end) the following moments can be distinguished :

Preparation for the holiday: It can start a week before January 13. Basil is celebrated poultry – Goose (duck) at Xoraxane -roma some Kaldarashi or cock (hen) at Burgudjii , Drandari some Kaldarashi . Very rarely – in the Burgundians – a lamb or even a pig is slaughtered, but this is done only by those families who have acquired a daughter-in-law or first grandchild during the year.

Preparation begins with the purchase of a goose or rooster, in case the family does not raise. The animal must be purchased no later than 12.01. and be sure to sleep in the house “so as not to escape luck.” On the morning of 13.01. the goose or the rooster is slaughtered and at 2 pm the real preparations begin. The main concern is the preparation of the table and the making of whey. In different groups of Roma, survaknitsi look different. Common is that made from dogwood other is the decoration – from popcorn, peppers, candy in Horahane -roma to “simple” decoration pindari in Burgudjii . At the drandari from Zlataritsa and Lyaskovets the survaknitsa is not decorated.

Dinner: Vasilitsa is a distinctly family holiday. For all Roma groups the dinner on 13.01. plays an extremely important role and is filled with rich symbolism. Also for all Roma groups it is mandatory from the moment when dinner starts until midnight that the doors of the house are tightly closed – no one from the family goes outside (even in the yard!) And no outsider is allowed to enter the house. This is one of the few cases in which the Roma flatly refuse their traditional hospitality.

Dinner starts at different times in different groups and villages, most often between 8 and 10 pm. In the past (and in some groups – even today) it was mandatory to have dinner on 13.01. to be on a special round table – blue. On the blue are placed the prepared dishes – boiled rooster or goose, sirmi (often with luck – dogwood buds), pie with luck, richly decorated bread (also very often with luck) or ritual bread – kulak, wine, brandy and more. The burghers also add a handful of raw wheat (from the wheat they cook for Christmas and Christmas) and a handful of raw rice (from the rice used to boil the rooster). In the case of drandari, the so-called “gypsy pot” (with dried okra and dried tomatoes). Among the burghers from the Kaltinets district (the town of G. Oryahovitsa) and among the drummers from the town of Zlataritsa, the village of Salmanovo, Ivanski and others. It is a tradition (or rather: it was a tradition) to put on the table the riches that the family has – gold, pindari , jewelry… In other Burgundians it was a tradition to take these riches outside and bless them, leaving being visible. To this day, anecdotal stories are told among Roma from various groups about the theft of gold left on display by the citizens of Burgas on St. Basil’s Day.

The dinner usually starts with incensing and blessing the table. The narrator (usually the woman) prays for luck, fertility and happiness. The family members then say goodbye by kissing each other’s hands. After the forgiveness, the oldest (grandparents) take the richly decorated bread (or kulak) and break it in two “to see who’s luckier this year and who will feed the house.” Then mother breaks pieces of cake for all children (at Drandari in Salmanovo) or any children breaks as possible a larger piece (at Horohane -roma by with. Marash). The first bite of the pie is not eaten, but wrapped and placed under the pillow. It is believed that what the sleeper dreams that night shows what will happen in the coming year.

Dinner is associated with some customs that are different for different Roma groups. Eg. shegovitata “stealing cock” in Horohane -roma by with. Marash is a custom in which each tries to steal unnoticed by others boiled duck to be “the most fortunate and most healthy.” In other Roma it is customary to place kulaks on top of each other and for someone from the family to hide behind them – it is wished that next year St. Vasil will bring more kulaks, etc.

In almost all groups, the table is not raised throughout the night. It is believed that this brings prosperity. 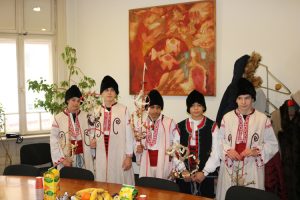 Welcoming Bango Vasil and the New Year: Welcoming Bango Vasil, and through him – the New Year, occupies an important place in the holiday. It is realized in two ways – by survakane and by incarnating the head of the family in the role of Bango Vasil, or his messenger. While the first option is found in all Roma (which reflects the Bulgarian tradition ” survakarstvo “), the second – only Burgudjii and some horohanne -roma (ie those groups that celebrate Vassilitsa more solemnly) as it is always combined with the first.

Vasilyovden and the New Year come at midnight. From this moment the survakan begins. In the Kaldarashi (for example in Dryanovo) during the night the family members are mostly survaked, and in the other Roma the children can go around the neighboring houses (after midnight their doors are already open for visitors). Survakars wish health, fertility and good luck. Their words are usually short and simple – for example. “Surva-surva year, next year – still alive and well” in Burgudjii ” Akulsa – bakulsun high priest, saying saulsun !” – “Merry Surva year – next year again alive and well” in Horohane -roma etc. As in the Bulgarian tradition, dried fruits, candies and money are donated to survakars.

Of greater interest is the custom of incarnating in the role of Bango Vasil ‘s envoy . At the burghers in Kaltinets , G. Oryahovitsa, exactly at midnight the head of the family (or the one who is the luckiest) collects the wheat and rice from the blue one, puts them in a towel, takes the towel, the whey and some water container and goes to the fountain. There he first wheys the water, then washes his hands and face, fills with water and goes home. From that moment on, he played the role of Bango Vasil (or his messenger).

Upon entering the house, he shouted: ” Vasili aval ” – “Vasil came” and threw the wheat and rice. The children collect as much of it as possible, because this is the luck that St. Basil brings them. Then the survaka begins, as first the head of the family (the messenger of St. Basil) survaka all for health and luck.

In Horohane -roma by with. Aquarius with. Maras and others. Bango Vasil’s envoy is not the head of the family, but a close relative (brother-in-law, uncle, brother-in-law, badjanak), who comes as the first guest on 14.01. in the morning. The guest stands at the front door, but refuses to enter, despite the urgings of the host. He sets as a condition to build a ” kypri ” – a bridge. Then the host “builds” a bridge – puts on the ground in front of the guest money (banknotes) from the outer gate to the inner door. The guest ( Bango Vasil) limps on the built bridge (banknotes) and thus enters the house.

Upon entering, he greeted the audience : ” Bango Vasui ayla ! Bango Vasili came. Bus selyam buchala here ! I send you a lot of health!”. In response, the host pours brandy on everyone and says: “I ask your Lord, as you honored me, so God will honor you!”