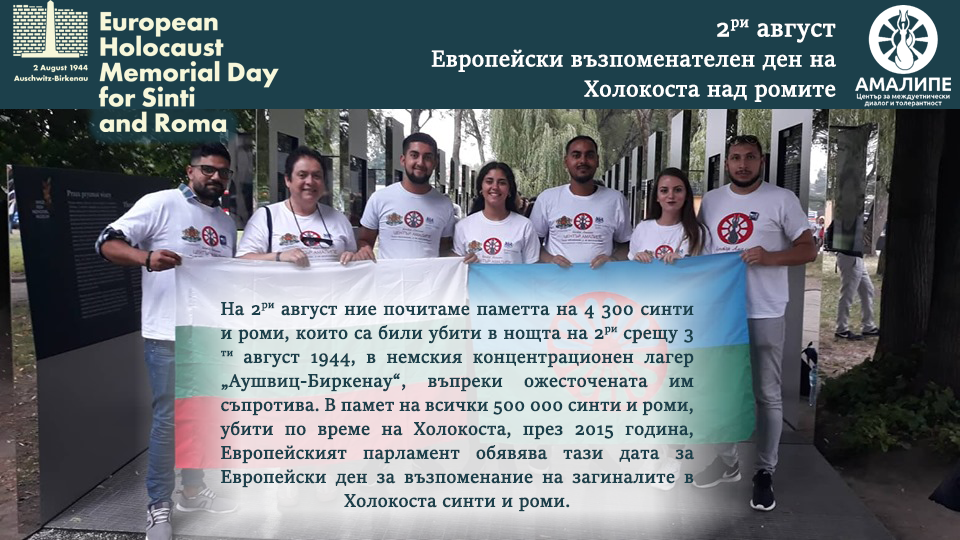 On today’s date, 77 years ago, the so-called “Gypsy Family Campus” at the Nazi concentration camp Auschwitz-Birkenau was liquidated. On the night of that day, over 4,000 men, women, and children were murdered in a particularly cruel manner in the gas chambers. This tragedy made the date 2 August a gathering point for the horrors and mass extermination of Europe’s Roma during the Second World War, and in 2015 the European Parliament declared the day as European Roma Holocaust Remembrance Day.

Between 1933 and 1945, Roma and Sinti in Europe were subject to Nazi persecution. Constructing long-standing prejudices, the Nazi regime viewed the Roma as ‘asocial’ (outside ‘normal’ society) and as a racial ‘inferior race’. During World War II, the Nazis and their collaborators killed hundreds of thousands of Roma men, women, and children.

All who fell into these categories, along with Jews, were isolated and sent to specially created concentration camps. In 1942, over 10,000 Roma were transported to the Auschwitz-Birkenau camp. Roma from German-occupied territories was also sent to concentration camps, accused of being spies for their respective countries. Between February 1943 and the summer of 1944, Roma from Germany, Austria, Bohemia and Moravia, the Netherlands, Belgium, northern France, Poland, and the Soviet Union were deported to the Auschwitz-Birkenau camp.

In 2015, the European Parliament declared 2 August as European Roma Holocaust Remembrance Day, commemorating the 500,000 Roma killed during the Nazi occupation of Europe – almost a quarter of the total number at the time.

According to census data, the Roma population in Bulgaria has not decreased since the war but increased. Few know that the government of the Third Reich demanded that Bulgaria extradite all the Jews, which would have been followed by sending the hundreds of thousands of Bulgarian Roma to death camps. The Bulgarian intellectuals of the time, the Orthodox Church and the general public, and the Bulgarian Tsar Boris opposed this demand and thus saved 45,000 Jews and hundreds of thousands of Roma.

Who remembers the Roma genocide today?

Sometimes known as the “Forgotten Holocaust,” the Roma genocide is excluded from the history of World War II decades after the war ended. There were no Roma witnesses at the Nuremberg trials. In 1950, German judges hearing restitution claims were advised by the Württemberg Ministry of the Interior that “the Roma were persecuted under the National Socialist regime not for any racial reason, but because of an antisocial and criminal record.”

Since the 1970s, activists, and researchers have been fighting for the recognition of the genocide as part of a broader movement for Roma rights. Crimes against Roma during World War II were officially recognized by German authorities in 1982. Thirty years later, in 2012, Chancellor Angela Merkel unveiled a memorial to the Roma genocide in Berlin.

Today, Hungary, Poland, Slovakia, Ukraine, and Croatia observe 2 August as Roma and Sinti Genocide Remembrance Day. On 15 April 2015, the European Parliament adopted a similar resolution calling for 2 August to be recognized as a European Day of Remembrance of the Roma Holocaust and in memory of the victims of the Roma genocide during the Second World War. In October 2020, the International Holocaust Remembrance Alliance (IHRA) endorsed an official definition of anti-Roma discrimination/anti-Gypsyism. It equates anti-Roma discrimination with anti-Semitism, and one of its points requires commemoration on August 2nd.

Why does the commemoration of the genocide of the Roma matter?

The lack of recognition of the crime reflects the long-standing discrimination against Roma in Europe. Proper acknowledgment of the past treatment of Roma is crucial not only for justice and dignity for those who died but also for confronting ongoing anti-Roma speech and behavior. A 2019 Eurobarometer survey clearly shows that Roma is the most discriminated and most hated minority across Europe, with Bulgaria and Romania ‘leading’ the negative trend. Surveys of social distances in Bulgarian society (conducted annually by the Open Society Institute) show that Roma is the most segregated and hated minority in Bulgaria, with the negative trend worsening since 2013. Therefore, all democratically-minded citizens must oppose the growing manifestations of anti-Gypsyism and anti-Semitism! The tragic lessons of history must be learned and must not be repeated.

The best way to get a feel for the events we are talking about today is to read Maigul Axelsson’s novel “My Name Is Not Miriam” published by Hummingbird. You can feel them … so that afterward you no longer want to feel … 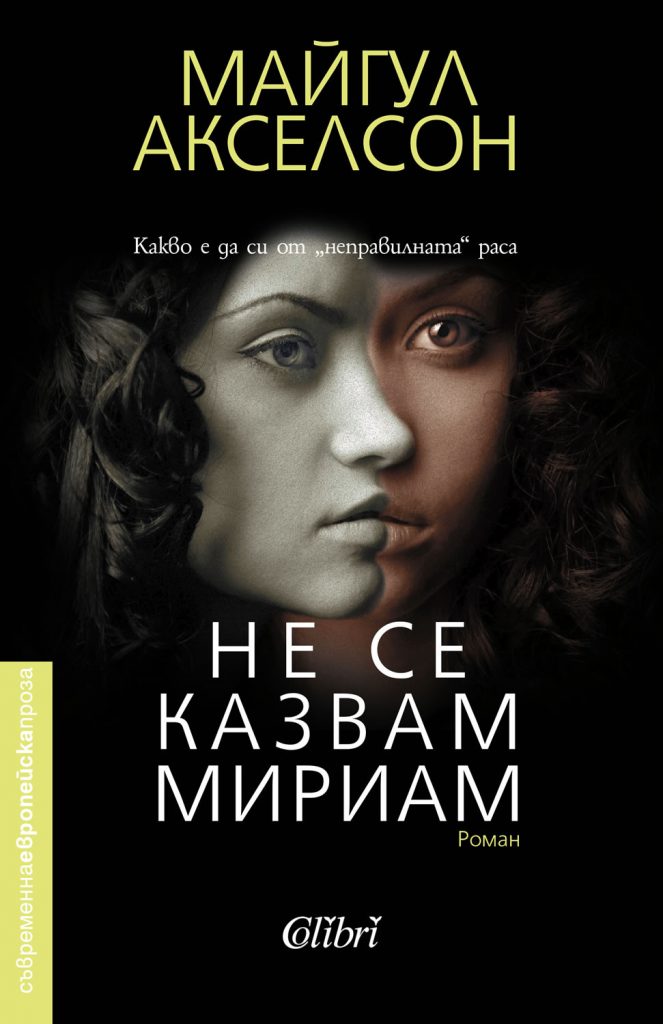 The Swedish author walks with us the path of the Roma girl Malika, who passes through the non-being of Auschwitz and Ravensbrück to arrive at the life of the Jewish girl Miriam, who illustrates all the plagues of post-war Europe and the cloying stereotypes. Reading the novel, one can very easily delude oneself into thinking that one is not in post-war Sweden, but in any modern European country where we are all equal, but some are more equal than others.

The novel is not just a story about the horrors of the Holocaust, the concentration camps, Dr. Mengele, etc., but it is one of the few novels that bring up subjects that prick you like a pebble in a shoe, that are always there and not there, depending on whether we want to talk about them or not. And in most cases, we don’t want to. Several threads intertwine in the novel – like a tangle by which we manage to stay in this world. One of those threads is that of intolerance – to hate even when you’ve figured out what it’s like to be hated, to try to show how someone feels who can’t find their place because hate doesn’t create space; what it is to be a gypsy in a place where “Germans hated people with yellow triangles terribly, despised them, but prisoners, capos and celebrities, cloister cleaners and other sophisticated people behaved much worse to gypsies, and most of the time one had to deal with them” – a hatred that does not burn out with the gas chambers, but like a phoenix continues to rise again and again even after the war is over after everyone has accepted that the past is now conveniently just the past.

The other important thread is that of identity – who are we and what makes us who we are? Why do we want to escape ourselves and what will we find beyond. For the heroine Malika/Miriam, it’s a question of survival. Is it? And what is this question for the tens of thousands of Roma today who are trying to escape their identity? How do you survive when you are not yourself?

Gypsies. You know them for what they are …

Else had saved Miriam. Gave her food. Got her a nice job. Got her talking again. She’d also used that word that Miriam never dared to utter, but that lived quietly inside her. Free. Freedom. Else said this about the gypsies, too, though. And that scared Miriam. She was much more frightened than usual. It made her fear that the ground could dissolve beneath her at any time, and she could collapse and be swallowed by a silent black hole. That no one, absolutely no one would help her, protect her. Because she was a Roma. A gypsy.

Gypsies have always been hated and disliked, so one must be careful not to start hating oneself. So her grandfather had said. And one can never rely on a gajji or a gajjo, never. Malika had thought of her mother but said nothing. And her grandfather just kept talking. Gajji was also afraid of the gypsies. They thought they were all wild and dangerous. Maybe it was really so. She thought about his words after a few weeks in Auschwitz, when she realized that the Gypsies were the only prisoners in the family camp.”