Representatives of four generations of Roma activists discuss the achievements, challenges and prospects of the Roma movement

The past, present and future of Roma inclusion was the basis of the discussion of four generations of Roma activists, representatives of the Informal Ambassadorial Group for Roma Integration in Bulgaria, the European Commission, UNICEF, the World Bank and all activists in the form of educational mediators, youth, teachers, directors and guests of the Discussion Forum “OPRE ROMA! We are not alone! Keep moving forward together!”. Motivated for changing attitudes, equality and unity, over 100 participants took part in the online event, organized by the Amalipe Center, to share their views on the Roma issue, learn more about Roma culture and history on April 8 as International Day of the Roma!

The event began with the traditional commemoration of the thousands of Roma killed during the Holocaust, with live broadcasting of several Community Development Centers, by throwing flowers in the rivers and remained silent for a minute in memorium of the tragedy of thousands of Roma families in WWII.

The emotional beginning was complemented by a video message from representatives of the Informal Group of Roma Ambassadors, a group of 17 ambassadors from European countries and the United States, UNICEF and the World Bank. In the video, they express sympathy for the Roma community and send messages of tolerance, equality and unity! Thanks to:

who sent these strong messages and supported entirely the iniciatives of Amalipe Center, related to the celebration of April 8 – The Intermational Roma day! 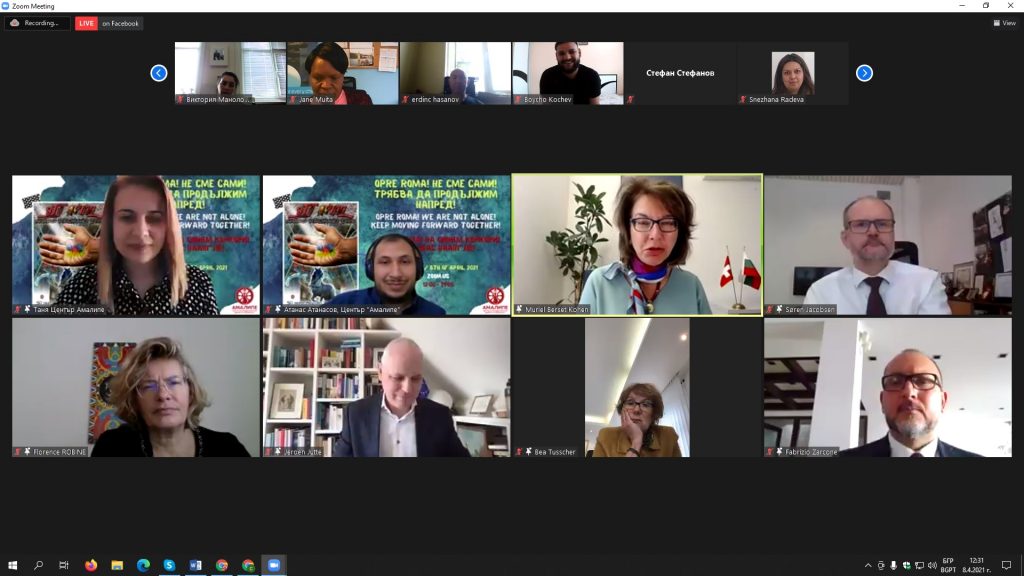 This was followed by a presentation of different generations of Roma activists who spoke openly about what they wanted to achieve, what they achieved and what message they will send to future generations about the issues they have failed to address and the challenges they have faced over the years. Vasil Chaprazov, as a representative of one of the first generations of Roma activists, writer and journalist, shared about the difficulties and stories that leave their mark, as well as messages from future generations that do not forget their identity and do not stop fighting for goals. you are! Sergi Karakashev, Yosif Nunev and Deyan Kolev added by highlighting the main challenges, such as learning the mother tongue, segregation in schools and negative attitudes in society. Here are some of what they shared:

Vassil Chaprazov: “Dear young people in the twilight of our lives, I want to tell you that the future is in your hands. We were among the first to keep saying what they needed, namely to remind us of this first Roma congress in 1971. near London. This congress that told the world that we Roma are here among them. It is time to take out our real name, what we were born with and given by our parents, what is only in our language – Roma, Roma!”

Yosif Nunev: “My generation learned from their previous generation, but how far we managed to pass it on to the next generation is not very sure yet. We, the vast majority of Roma, do not know that during the Holocaust the most important figures in the government of Bulgaria did not allow any of the Roma and Jews to be extradited. There has never been any doubt in my mind that education will shoot us up and forward.”

Deyan Kolev:
“It is extremely important to preserve the cultural identity, the preservation of the memory and the historical memory of what the Bulgarian Roma did and how they contributed to the Bulgarian and European history, of course education is also important.
Children themselves do not have stereotypes, but adults very often instill these stereotypes. Not knowing the Roma culture leads both to stereotypes among Bulgarians and to the denial of the own identity of a large part of the Roma in Bulgaria, as well as in the whole of Europe. As much as we are pessimistic and say that we have missed many opportunities, I can say that the Roma activists of my generation have managed to achieve a lot. The first of which, we managed to include the Roma theme in the operational programs and thus to provide a much more serious funding for Roma integration policies.”

Sergey Karakashev:
“Now it is difficult again, but there are already built paths to follow. There is a place to gain experience and I wish the younger ones to catch up with us and surpass us several times, so that our generation can be proud of you, so that we can say that there are people who follow us, there are people who they can do things better than us.”

Tanya Hristova:
“The key to success is embedded in education and educated Roma.” 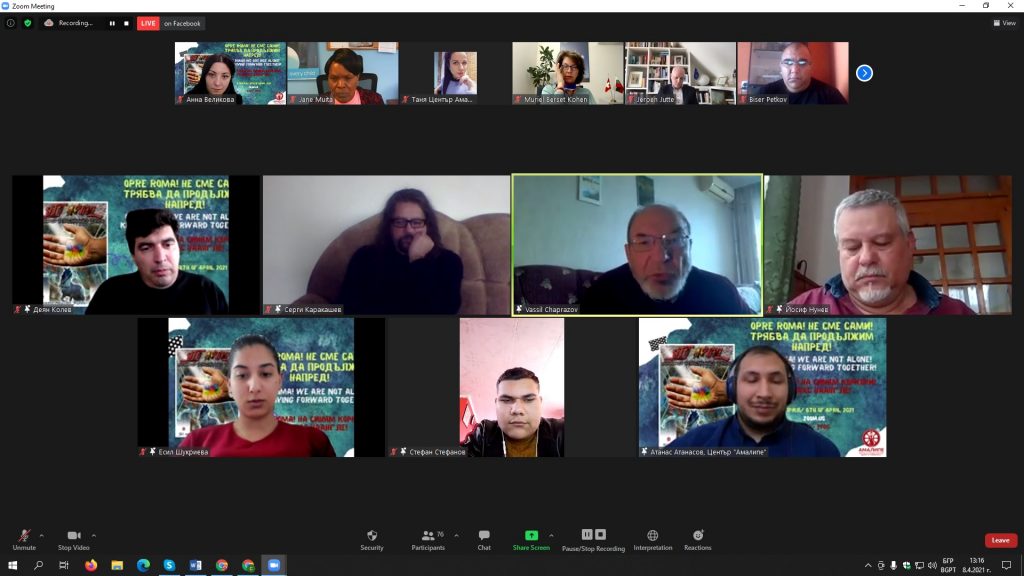 This, of course, is a complex and constant process that requires perseverance and persistence, as well as courage on the part of the younger generations. They also had the opportunity to express their views in the person of Tanya Hristova, the candidate for Young European by the Amalipe Center, Volunteer of the Year according to TimeHeroes and regional coordinator in Amalipe. The last words were also given to the last representatives of the youngest generation of Roma activists – Esil Shukrieva and Stefan Stefanov, who in their capacity as students-mentors of the AMALIPE Leadership Program, spoke about their achievements and their concerns about their peers, who they deny their identity and have no motivation to defend causes.

In the remaining minutes of the meeting, participants were divided into small groups to discuss how to move forward. Summarizing the parallel work in groups, Deyan Kolev was adamant that in one way or another, the active work of Roma activists should be continued, because the process is slow but steady and although the results are visible even after a generation, this process of modernization of the Roma will continue. 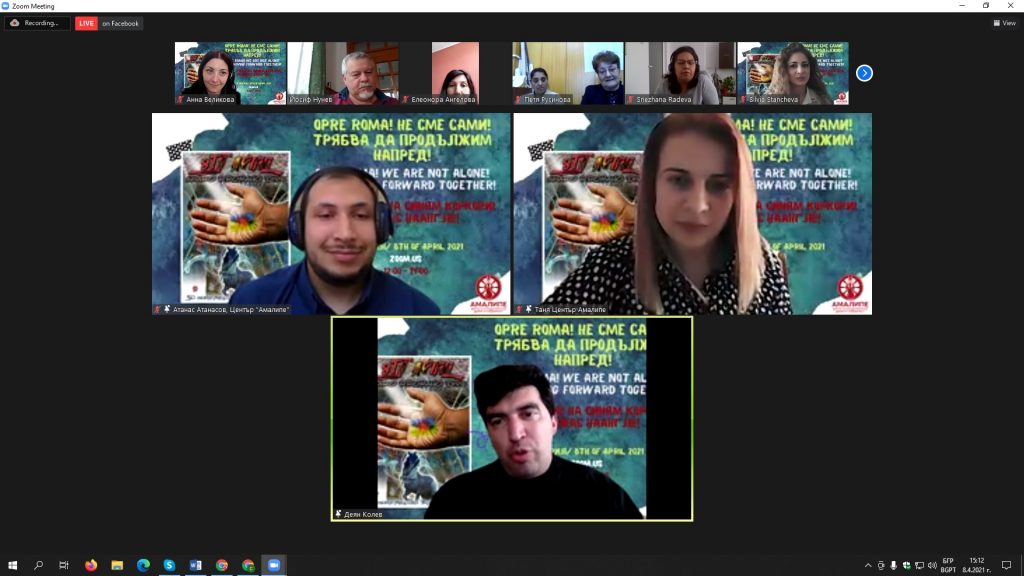 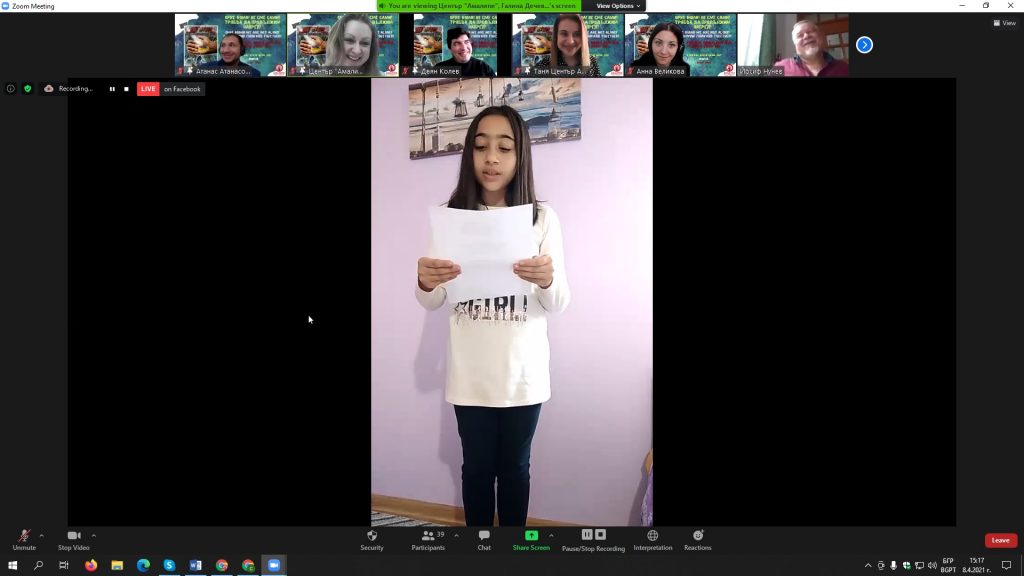 For April 8 today and the greetings for the celebration from the children, follow this link